IN the way that most things in life are, there was no moment where the stars aligned and a beam of silver brilliance illuminated me with inspiration; it was not a sudden cataclysm of grand events or even a single moment of clarity. It was more the lucky coincidence of a few small dust mites, just little things, which only in detailed retrospection, could one notice an amount of circumstantial  alignment, that lead to this—which, of course, is on par with the scale of endeavor.

I was confronting my post-graduation ennui, as the evaporation of two of the more fulfilling experiences in my life (leading the water polo team, and learning tons of shit with tons of new people) had left me both without purpose and without the satisfaction of achievement of purpose. This was compounded by the fact that I had a degree in Mechanical engineering, which is a certification that I have all the necessary tools to be achieving things, but no job, which rendered those tools somewhat useless. I also other aligned mites; I had a little bundle of cash from graduation, a garage full of random bits of electronics, a shit load of time, and a best friend who wanted portable bluetooth speakers.

So I told him, I could build those for cheaper. He said fuck yeah, and I went to Urban Ore, where a quite lucky mite of dust fell into place; I found a use pair of drivers which just so happened to be the AuraSound NS4-255-4D. If this set of esoteric numbers doesn’t cause heart flutters, the NS4 is one of the best small format full-range drivers in the world, and it’s also impossible to get, because AuraSound was shut down by the feds. Th NS4 some how managed to sneak a little performance past the Iron Law;  it’s loud and it’s got bass in a small box, and it’s cheap (well, used to be cheap; the last commercially-available pair was bought by me, 1.5 years ago for $50). And somehow I had found a pair of these fuckers for $4.

And so I built him a damn boombox, and it’s design was mediocre, and the electrical engineering was shoddy, and the panels were cut from slightly different bits of wood, and nothing was quite lined up right, and it took all summer to get the right parts, and I ran up against the deadline of his birthday so I had to build for 2 days straight, and then it was the day of, and I hadn’t eaten all day because I had to finish it, and I was supposed to be leaving to go his house for a BBQ, and I was late, and I was and had been focusing for the last 8 hours to an extent that makes me wonder about the exact nature of my mental health, and I had my doubts about the whole thing because in someway the little guy’s success was entangled a bit with my own soul, but then it was time to go to his house, and since it was too late to turn back, I turned it on, for the first time, on the porch looking out to the sun setting over the Golden Gate, fog and clouds glowing with orange warmth, with my parents drinking a beer and my little siblings watching, and when the power light flicked on, and the beast was awakened with a bit of thunder, and the peaceful calm of a idyllic Berkeley summer sunset was shattered, I grinned.

Here’s the guy from that exact moment: 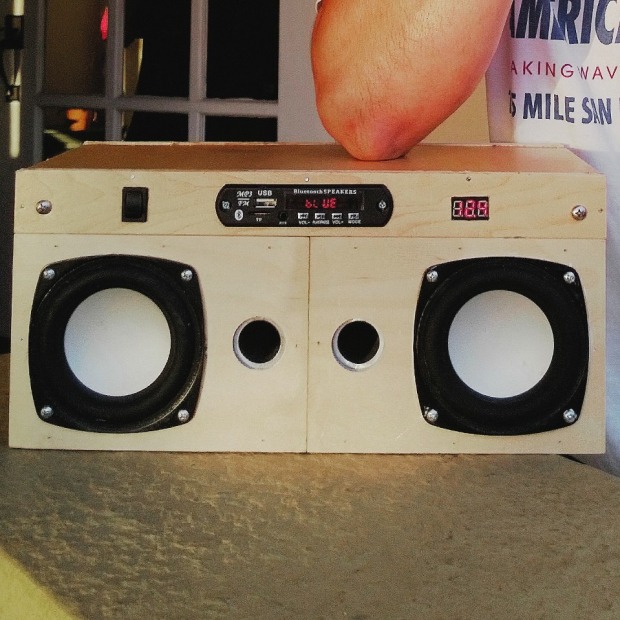 And Then The Rest

The response was positive, so I built a few more. Though, the first few efforts up until recently were a bit sophomoric, here are a few of them:

Here we’ve got some unfinished pictures of an ultra mini build with a 2 way design using a very surprising 3-inch sub that kicked low-end ass. Built into a (small) cake box. 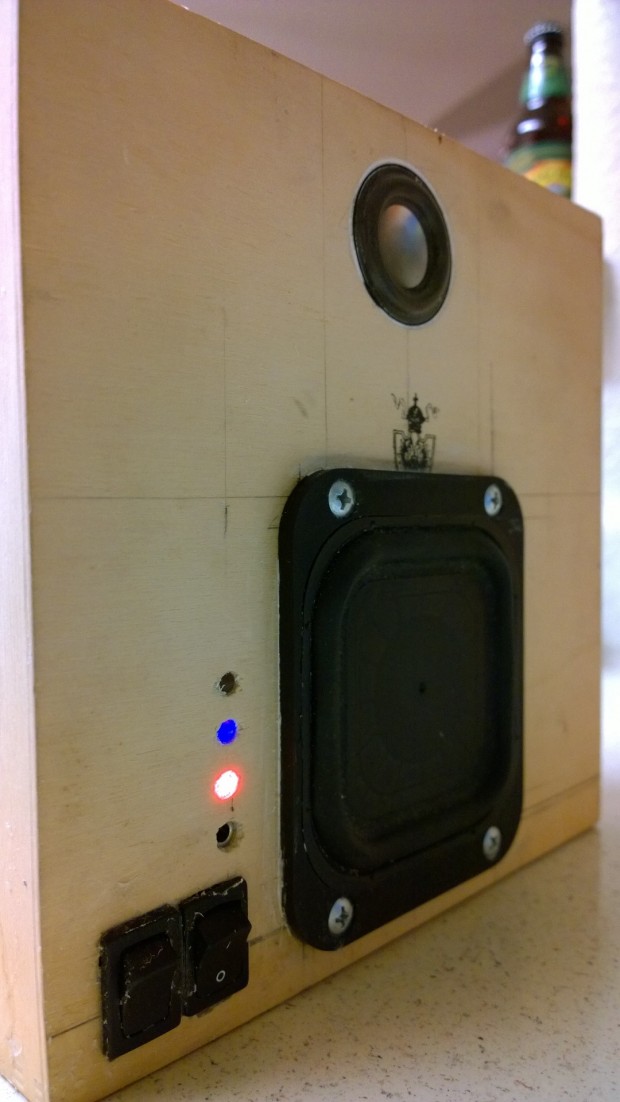 Here’s some beer for scale: 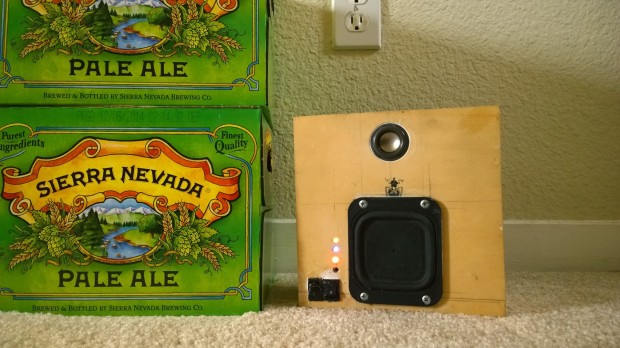 Here’s the second NS4 build, with some Brazilian cherry I found on the side of the street. Shipped this one to the east coast. Not the most finished product I’ve made but it worked ok. 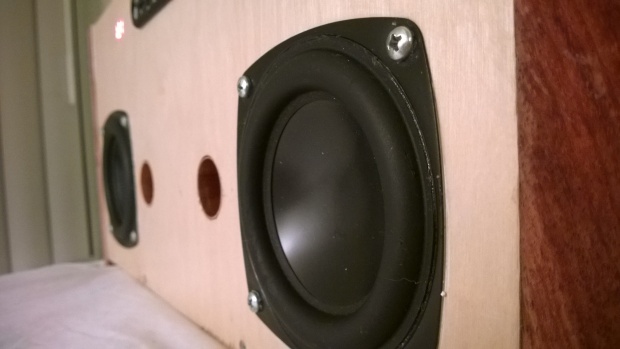 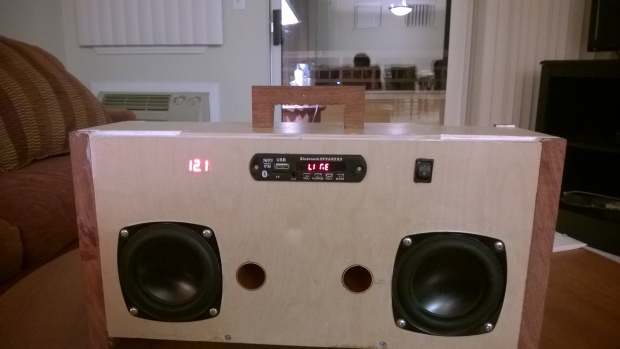 Eventually I realized that the finish (wood pun intended) is as important as the start so I worked on getting a cleaner look and looking into wood varnishes. 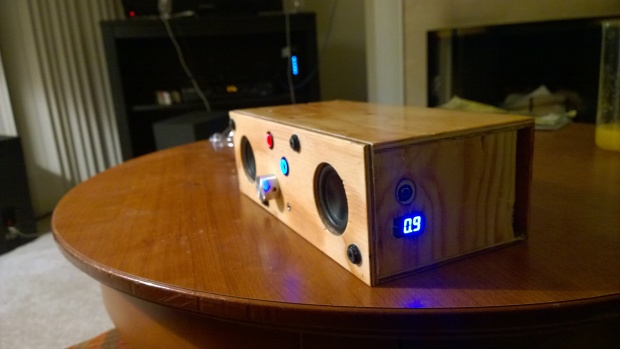 And the most recent piece, the KrumpKanon for Keith “I’ve been lifting so it can be heavy” Savran, complete with Lego detailing, a 200W sub, missile launch switches, and a marine spar varnish. It’s quite heavy. 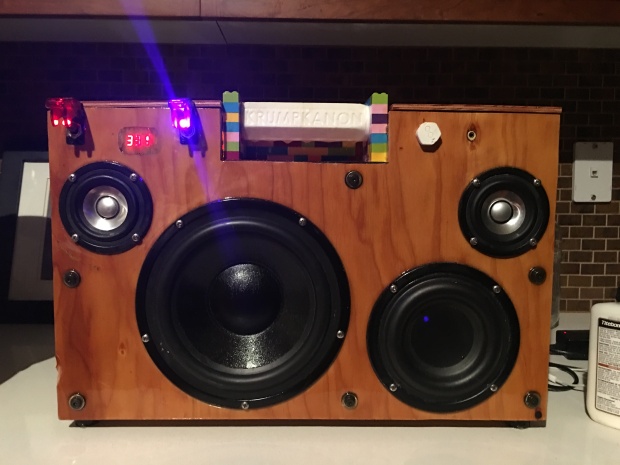