So for  the KrumpKanon I’m going with the W5-1138SMF, and for Keith’s, the W6 version of the same driver. Why? Because it has the excursion, Fs, and general specs to have solid bandwidth and linearity at loud volumes. Unfortunately, if you look at the models: 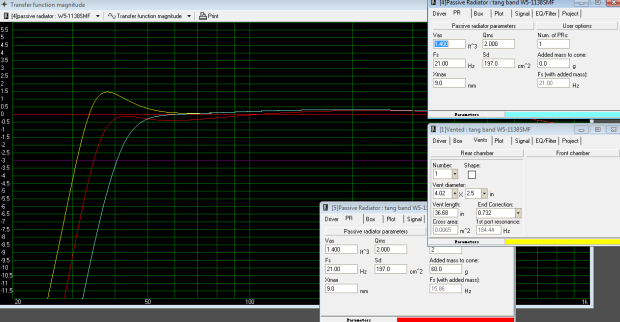 The yellow line represents the optimal ported design, while the blue is the optimal 8″ Dayton Audio PR design. The vented design is more efficient, has higher bandwidth, and requires less box volume. However, for a 4″x2.5″ port, opening I’d need 36 inches of port to get the 12L box resonating at 36 Hz. That’s absurd, and what’s more absurd is that at 50W, the airspeed would be ~40 m/s. That’s 90 mph, and the air has to move 90 mph through a folded port 3ft long. I have low expectations for the laminarity of the air flow in that scenario, but an educated guess tells me it would sound like an elephant farting through a muffler.

PR’s it is. With dual 8 inch passive radiators, I could be pretty near the vented design, but a) that’s a ridiculous amount of radiator area for a 5 inch  area, b) that’s 2x the cost, machining, surface area dedicated to the radiator, and c) trying to fit two 8-inch radiators, a 5-inch woofer, and 2 full ranges onto the front of the boom box would be ridiculous. Why not throw them on the back? Well, then the front will look stupid, barren. I want the raw visual and auditory power of a fat fucking 8″ blasting you in the face. But fitting 2 8’s on to the front of a reasonably sized boom box (using the esteemed [boombox name to go here once I find my notes] as a template) would be geometrically dubious.

So at the sacrifice of about 1/3 of an octave of bass, I’m going with a single 8. I hate leaving bass on the table, especially when it’s easy, efficient bass, but given the constraints and my desire for a simplistic design…it’ll have to do. Additionally, and this is the most important part, but, if you look at an analysis of the most popular music being played these days, there’s  little content beneath 40 Hz, and therefore, little need for sound below 40. So I guess 40 Hz it is, and we’ll hope it sounds good. There’s only way to find out.